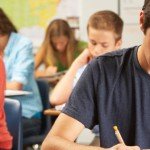 A close look at California test scores show girls lag behind boys in far too many subjects in high school — especially STEM subjects like geometry, physics, and chem.

If you’ve come to worry endlessly about the fate of boys in school, well, you’re not alone.

According to recent tomes with titles like The Trouble with Boys (2008) and Why Boys Fail (2010), boys are falling precipitously behind girls in school. Research shows that boys earn lower grades than girls and significantly more girls than boys go to college. To explain these differences, experts point out that school reading isn’t tailored to boys’ interests and that boys’ slower maturation rate gives girls an early academic advantage. With these facts circling like sharks, you may’ve felt your attention hyper focused on boys. But test scores reveal a gender gap — and in this case, it’s girls who need to catch up.

A close look at recent standardized test scores in California show that boys are far outpacing girls in STEM (science, technology, engineering, and math) subjects. Standardized test results are all about proficiency: like a pass/fail construct, the results are reported in terms of how many kids reached proficiency — or didn’t. In California, there are 31 subject-based standardized tests for high schoolers. While not all kids are taking all tests, the numbers show a clear pattern: boys are scoring proficient at significantly higher rates than girls. In fact, there are significant gaps in 14 of the 31 test scores — and boys are testing higher in 10 of them.

Where girls are testing well

The two STEM subjects where girls seems to be holding their own? Algebra and biology. Girls’ proficiency scores in bio are within a point or two of boys’ in ninth and 10th grades — and by junior year girls taking bio are outpacing their male peers by six percentage points. It’s the only science subject where that’s true. In California, biology is typically a ninth grade subject (and sometimes 10th), so the bio numbers here likely reflect the ironic truth that, while the gender gap persists, girls tend to take more advanced and AP classes overall — especially in subjects where they tend to be doing better, like bio.

It’s not a STEM field, but there’s another surprisingly consistent gap where boys are walloping girls: history. Girls lag boys in history in ninth grade, but by sophomore and junior year this gap widens. In 10th grade world history, for example, there’s an 11 point proficiency-rate spread between boys and girls.

Is your school any different?

Some schools buck the trends. Scouring California public high school data, there are schools where girls aren’t just keeping up — they’re setting the bar high for boys to catch up.

Take San Marin High in Novato, CA, for example. At first blush, the school’s GreatSchools Rating 6 doesn’t cause any waves. But the school’s GreatSchools Rating breakdown by gender shows that for girls, it’s actually a 7.  Part of this is due to a couple of impressive gender-bending stats in STEM subjects: In ninth grade geometry, the school’s proficiency rates last year were 58 male/71 female — in stark contrast to the 46 male/43 female state average. And their math scores show 10th grade girls reaching proficiency in Algebra II at higher rates (33 male/51 female vs. the state averages of 41 male/38 female), too.

San Marin High School Principal Adam Littlefield says he’s not sure what, exactly, they’re doing right to erase the gender gap. Anecdotally, Littlefield says “when I walk into calculus and pre-calculus, I see more girls than boys.” Across subjects, San Marin, like many high schools, has more girls taking AP classes. Still, “10th and 11th grade proficiency rates aren’t as good as we’d like them to be,” he says. He hope the school’s new focus on STEM going forward will help boost those scores.

Littlefield is trying to get more girls and minority students into STEM classes, but it isn’t easy. “We’ve started a STEM program this year with 60 ninth grade students,” he says. While the goal is promote STEM for all students, the inaugural program is limited — and competitive. They had 80 applicants for 60 spots this year, for which kids submitted letters of recommendation, grades and test scores, and evidence of a completed project for consideration. This first STEM class is “60 percent boys, 40 percent girls,” Littlefield says. “It’s partly the nature of the program,” he adds. Kids applying to the school’s STEM program need to show a completed project. “Kids with those kinds of interests tend to be boys.” To change that, he says, “We need elementary school teachers to promote these subjects.”

Figuring out where your school stands

But if your state doesn’t release grade-by-grade, test-by-test proficiency scores broken down by subgroup (or if we didn’t publish scores due to not enough kids taking certain tests), your school’s principal should be able to provide these numbers. It could be the start of an illuminating discussion.

Next: The murky middle: what an average school rating means