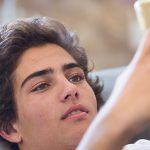 Her teenage son is a great kid. He also sends racy text messages. Is this just a sign of the times, or is he a virtual philanderer? One mom shares her strategy for dealing with sexting.

He rarely leaves the house, and he’s only had one date — but I’m concerned that my 15-year-old is a womanizer (or as he puts it, with a devilish grin, a “playa”). Despite this — or the rumors about “rainbow parties,” kids losing their virginity in middle school, and shows like 16 and Pregnant — I’m not all that worried. Sure, he was recently “dating” eight girls at the same time. But to call this dating is a stretch: These relationships happen entirely via text message. It’s called “sexting.” From the moment he and a girl hook up to the time she (it’s always her) dumps him, they never see each other — except at school and on Facebook.

It all began when he started high school. He became an object of desire for a handful of middle school girls who thought dating a high schooler would raise their social status. They got his cell number and started texting and calling him. He couldn’t believe his luck.

This quickly evolved into dating by text. He sends flirty messages, gets to call someone “baby,” trots out the sexy song lyrics he’s committed to memory, shows off the wit he’s often too shy to use in the presence of an actual girl, and laments how much he wants to see them — though he never makes any effort to do so.

In case you think I’m being duped about what he’s up to, I should point out that my son’s a child of this era, which means he shares everything on Facebook and never goes anywhere without asking for a ride. So I know. I drove him to his one and only date. And when he kissed that girl, he snapped a photo of the lip-lock and posted it to Facebook, calling it his first kiss. Then, shortly after asking the world why the worst day ever (the day he got dumped) happened a mere day after the best day ever (his first kiss), the sad poetry started on Facebook. So I think I have a pretty clear picture of what’s going on.

Texting is the medium for today’s teen, just as the phone was for my generation. I doubt anyone can — or should — stop it altogether. I do worry that all this texting is a crutch keeping my son from forming actual romantic connections. But as long as he has friendships and a balanced life, I think it’s more likely providing him with much-needed practice talking to girls. You see, my tall, handsome boy is shy and overthinks everything. He’s comfortable at home and in small groups of close friends, but he clams up in a crowd and around girls. Like any teenage boy who likes girls, he wants to date them, be liked by them, and — someday, if all goes well — touch them.

But I’m not taking the dangers lightly, either. The problem with sexting is that it can get wildly out of control for reasons no teen — certainly not mine — is equipped to handle. (Hell, even celebrities and politicians have proven ill-equipped to manage their would-be private sexts.) According to a 2009 study conducted by the National Campaign to Prevent Teen and Unplanned Pregnancy, 20 percent of teenagers engage in sexting on a regular basis. And a more recent poll by Wet, a manufacturer of intimacy products, found that almost a quarter of respondents have accidentally sent a sexy text or “sext” to the wrong person.

It’s when those sexts involve images that the trouble really starts. A small mistake can quickly lead to the sort of public humiliation that ruins young lives. As if that’s not bad enough, sexting is actually — and absurdly, if you ask me — more dangerous for teens than for stars and lawmakers because their sexting partners are typically minors. Taking a sexy picture of a minor (even if it’s of yourself) and transmitting it via text or email (even if only to a friend) is distributing child pornography, a crime that carries serious penalties including prison time and mandatory registration as a sex offender. These laws were created to contend with society’s most repellent deviants. But there are numerous cases of teens being prosecuted who were only flirting with a boyfriend or girlfriend. (There are currently amendments in the works in many states to lessen the penalties for teens that fall afoul of child pornography laws due to sexting with a friend.)

So I’ve done my research and I know that sexting could get my son into trouble. But the truth is that sexting is popular, and from what I hear, sending affectionate messages or intimate photos to someone you care for is lots of fun, offering much of the thrill and almost none of the physical risks of actual sex. Even if my young Casanova wasn’t into it, he’d likely be pressured by a girl to do it. According to Pew Internet, trading sexy images can be anything from “relationship currency,” where if you don’t do it, you won’t be liked, to a fun replacement for sex.

So long before these young sirens scrambled his brain, I told him that any photos he takes with the phone and sends via text go to our service provider’s website for backup. And when I log on to pay the bill, I can see those photos. “I’m not intentionally looking at them,” I explained. “But I can see them. So be careful not to text any pictures that you don’t want me to see.” (Yes, I stretched the truth a bit.) I also told him the true dangers and showed him news stories of kids being prosecuted for trading sexy images.

In fact, I know my son isn’t sending photos because I read his texts on a random but regular basis. I know some parents have a problem spying on their kids, though a survey from Retrevo found that 39 percent of mothers have done the same thing. Besides, I don’t do it secretly;  I usually announce loudly that I’m doing it. (It doesn’t bother him as much as you might think.) I see it as a visceral demonstration that there’s no such thing as privacy when it comes to texting, so he’ll never operate  under the illusion that there is.

I say nothing about the sexy stuff in the texts — and some of it is pretty darn sexy — as long as there are no images. (So far there haven’t been.) Bullying, mistreating the girls, social pressure, and coercion are areas where I would intervene.  But as long as he’s using his command of the language, the art of double entendre and poetry to make girls swoon, I believe he has a right to use the communication tool at his disposal for one of the primary reasons language was created. Perfecting the language of love is good practice for future adult relationships.

Sex coach, psychology professor, and author of The Nice Girl’s Guide to Talking Dirty, Dr. Ruth Neustifter is a fan of sexting — at least for adults. “When I teach workshops to adults,” Neustifter told me, “I am constantly telling adults to flirt by text. But when it comes to kids, we get very upset.” Of course we do. There are dangers — especially for kids — to contend with, and as a parent, I need to help him navigate these uncharted waters. But from the viewpoint of this mother, the potential  hazards of sending sexy messages pale in comparison to actual sex between young teens who aren’t ready for it. It seems as if flirting by text is giving him time to play this potentially risky game from a distance.

And so far, flirting is all he’s doing. The fact that he’s doing it by text actually gives me access to information I would otherwise never have. Recognizing the line between fun and flirty and dangerous territory can be a challenge — even for adults. “Make sure everyone is happy and that they understand the transactions that are occurring,” Dr. Neustifter suggests. Those sexts are helping me do just that.