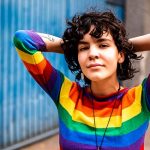 Understanding “they” and preferred pronouns

Is a teen you know telling you they’re a “they?" Here's how parents can navigate the new world of gender pronouns.

My friend Max bolted up from the magazine he was reading. The conversation he’d been anxiously anticipating for months had finally arrived. Staring across the living room at his 15-year-old daughter Jennifer, he asked, “What does that mean?”

“Yes,” smiled Jennifer. “So, I’m going to change my name to Jordan. And then–”

“Wait, wait, hold on,” Max interrupted. “Isn’t that a big decision for a high school sophomore?”

“I’m sure,” said Jordan-previously-known-as-Jennifer. “And from now on, my personal pronouns are they/them.”

This dialogue, recounted to me recently by an old friend, resembles many conversations taking place in homes across the country today. Middle and high school students are explaining to their parents that they want to change their name and pronouns to reflect their gender identity. And while your child may never approach you with such revelations, chances are good that your child will know a schoolmate who has chosen a new name or new pronouns.

Confused? You’re not alone. For many, the evolving facets of gender identities are hard to keep up with and for some, downright difficult to accept. But no matter how bewildered you are by the notion of gender fluidity, experts say it can be easily understood by any parent who wants to get ‘woke’ to the new gender realities. The first step is grasping how scientists have come to understand gender.

According to “The Biological Contributions to Gender Identity and Gender Diversity,” a paper published in the Journal Behavior Genetics, the American Psychological Association defines gender identity as “a person’s deeply-felt, inherent sense of being a boy, a man, or a male; a girl, a woman, or a female; or an alternative gender (e.g., genderqueer, gender nonconforming, gender neutral) that may or may not correspond to a person’s sex assigned at birth or to a person’s primary or secondary sex characteristics.”

The Gender & Pronoun Guide from the University of Connecticut Rainbow Center explains it this way: There are three aspects of gender which exist independently of each other. They are 1) biological sex (genital anatomy); 2) gender expression (how we present ourselves to the outside world); and 3) gender identity (a person’s internal sense of their true gender). Identifying as “androgyne” or “bi-gender” indicates a combination of both masculine and feminine characteristics, “agender” is the absence of gender, and “gender fluid” is moving back-and-forth between genders. “Nonbinary” and “genderqueer” refers to anyone who does not identify as either traditionally male nor female.

People who do not identify as either male or female are (quite logically) asking society to refer to them using gender-neutral pronouns. “They/them’ is the most common pronoun used by nonbinary gendered people, but there are multiple other options, from Ze to Xe.

You may be dreading this new challenge in etiquette. You may even hope that non-gendered pronouns are just a passing fad. But if the new generational norms are any indication, you’d be advised to give up that hope. A recent survey by Pew Research revealed 35 percent of Generation Z (born post-1996) say they know someone who uses gender-neutral pronouns, and 59 percent of Generation Z say that forms that ask about a person’s gender should include options other than male and female. My 19-year-old daughter assures me everyone at her Iowa college accepts nonbinary gendering and the new pronouns.

Indeed, long-standing institutions have already adapted their policies to embrace a more complex gender landscape. The University of Vermont began allowing students to indicate a neutral gender when they register 10 years ago; Harvard followed in 2015. Today there are at least 20 non-binary campuses. Facebook added 51 different gender options in 2014; Lyft recently added gender-neutral pronouns to its rider app, and numerous states are allowing people to change the gender on their birth certificate. Earlier this year, United Airlines announced non-binary gender booking options.

It’s true, there are many critics of the new gender expansion, like Jordan Peterson, the psychology professor at the University of Toronto who gained notoriety in 2016 by refusing to use gender-neutral pronouns with his students. But… Peterson is 56 years old. Tomorrow’s culture will be designed by today’s teens and twenty-somethings, not by relics like you, me, and Peterson.

If your offspring asks you to use strange, new pronouns with them or their friends, you might find it awkward and frustrating, not to mention grammatically incorrect. You may fight it unnerving. You may not understand why or how they could feel this way.

But for those who choose new pronouns, there is a lot more at stake than social awkwardness and confusing grammar.

“Addressing youth by their chosen pronoun is a critical part of validating and affirming their gender identity,” explains Sabra L. Katz-Wise, Ph.D., Assistant Professor in Pediatrics at Harvard Medical School. “When youth hear the correct pronoun being used to refer to them, it is a clear sign that the person using that pronoun sees them as their affirmed gender.”

Indeed, for people with a nonbinary gender identity, being referred to by the wrong pronoun makes them feel unwelcome, invisible even. Over the years, I’ve come to know a growing list of young and old (but mostly young) folks who have changed their pronouns. They all say it hurts to be misgendered.

Haley, a nonbinary ‘they/them’ film student at San Francisco State, who I met through a mutual friend, stated via text message, “being misgendered is painful and uncomfortable. Not feeling seen wears on you. If I go for a long time being misgendered, I get depressed because it’s like I’m invisible or everyone is wishing I was different. When people, especially my loved ones, use the right pronoun, I feel like they see me and love me just the way I am.”

Fifteen-year-old Kieran of Missouri (who I met ten years ago as “Kiera”) explained last week via email: “It’s really uncomfortable to be misgendered. I especially don’t want excuses. I’ve gotten a lot of ‘it’s so hard to remember’ and ‘we’re old, it’s such a new idea.’ Why not put in the effort? It’s just like remembering someone’s name. It feels really nice when people use the right pronouns! To know they’re genuinely putting in the effort. ”

“Even people who are close to me still accidentally misgender me, using he/him instead of they/them,” admits 19-year-old Jey, an Oberlin College student, introduced to me by a relative. “Calling someone’s identity into question can feel really invalidating, especially when someone first comes out. It’s a respect thing… If people don’t respect your pronouns, in my mind, they’re disrespecting your identity, and you in turn.”

“By using my designated pronouns, people honor my identity,” explains Rabbi Dev Noily, my friend for 25+ years, on the online platform Evolve. In their recent essay, called My name is Dev, and my pronouns are ‘they’ and ‘them’ , Noily writes, “From the first time I tried them, ‘they/them’ pronouns felt like they fit better than any others. Each time someone uses my correct pronouns, I feel a little boost of affirmation, visibility, and truthfulness. Each time I am misgendered, I feel a little sting of dysphoria and displacement.”

Is it difficult for parents to make the switch? Yes, it often is. “We stumble,” Kieran’s Dad confessed to me. “My wife is better at it than I.”

How important is it to be perfect? “What really matters is effort,” says Haley. “If it’s clear that someone is trying and will eventually get there, I’m happy.”

So what should a parent do if their child initiates a conversation about their gender? Ritch C. Savin-Williams PhD, professor emeritus of developmental psychology at Cornell University and author of Beyond Pink and Blue: Exploring our Stereotypes of Sexuality and Gender shared his tips for parents facing a child who is changing before their eyes.

If your child wants a new pronoun

Though the nonbinary culture may seem like it’s come out of nowhere, those in the know say it’s no insubstantial fad. “For thousands of years, nonbinary people have existed across the globe, says Jey. “Hijiras in India, Two-Spirit people in Native American cultures, “Sworn Virgins” in the Balkans…. Hopefully, one day, they/them will be just as normalized as she/her and he/him.”