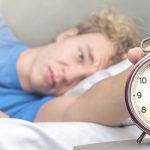 The link between teen sleep and the morning bell has been known for some time, but has recently become far more visible.

For many teens, last year’s pivot to online learning due to COVID-19 had an unexpected silver lining. Without the constraints of traditional school start times — as early as 7 am in some communities — they found they no longer had to wake up quite so early in the morning.

Set against the backdrop of what experts call epidemic sleep deprivation among teens, that’s no small matter.

Most teens get far less sleep than the 8 to 10 hours per night that is recommended. According to data gathered in 2019 by the Centers for Disease Control and Prevention, just 22 percent of high schoolers met even the minimum of that range on an average school night.

Early school start times are a major driver of this, given that teens are biologically wired to go to bed later once puberty hits. That’s why later school start times are a suggested fix, and why major public health and medical groups, including the American Academy of Pediatrics and the American Medical Association, recommend middle schools and high schools start at 8:30 am or later.

Numerous studies have shown that later starts result in more sleep for teens, spurring academic gains, including higher test scores, better attendance, and improved graduation rates. Well-rested teens are also less likely to use substances or be involved in drowsy-driving crashes, among other benefits.

In Seattle, which pushed back its start times to 8:45 am in 2016, students gained 34 minutes of sleep and posted a 4.5 percent increase in grades, according to a study published in Science Advances in 2018 detailing results at two high schools there. At the school with a significantly higher percentage of students who are from economically disadvantaged or historically underserved families, tardiness declined and attendance improved, says Horacio de la Iglesia, a biology professor at the University of Washington and one of the study’s co-authors. That brought both measures in line with the other school and “had sort of a leveling effect,” he notes.

Despite the proven health and academic benefits, however, many school districts have traditionally viewed the shift as being too costly or disruptive.

Among the issues most commonly raised are bus schedules and after-school sports. Both have been successfully addressed in districts around the country.

Keeping a flexible mindset is key, as is taking into account the specific situation in each community. “Different districts find different solutions,” Payne says.

Overall, many of the perceived challenges are scheduling-related, she notes. With sports, for example, some schools have adjusted the length of practice times or found a way to use their fields more efficiently — perhaps by having one team use part of the field for warm-ups while another team wraps up practice.

Bus transportation, too, can often be adjusted without needing to add more buses — sometimes by altering the sequence of schools the buses serve in the district, or by finding efficiencies in the schedule, which may not have been reevaluated in many years. “We found that almost every district has at least one no-cost option,” Payne says. “Any flexibility you can give your transportation planners is going to help them be able to explore a wider variety of options.”

She recommends that all stakeholders be involved in “the logistical challenge of putting the puzzle together in a different way.”

Other best practices include finding out how other districts have addressed similar issues, and allowing adequate time both for communicating about the shift — and the rationale behind it — and for making logistical changes. Start School Later even maintains a Myths and misconceptions section addressing some of the most common topics that arise.

Students who have been involved in the effort are often the best ambassadors. Rachel Marciano, who graduated from Radnor High School in Radnor, PA in 2020, recalls meeting with peers at other schools and with officials in neighboring districts to share her experience after her high school moved its start time from 7:35 am to 8:30 am. Prior to the change, “where it really started to show was those last couple of periods of the day when everyone would be dragging,” she says.

Marciano had previously gone to bed close to midnight and gotten up at 6 am for school; after the change, her bedtime stayed the same, but she was able to wake at 7 am instead.

Terra Ziporyn Snider, executive director and co-founder of Start School Later, has found that a growing awareness of the importance of sleep has led to a marked interest from schools that are interested in shifting their start times. “There’s a lot less of the question, ‘Should this be done?’ and more ‘How do we do this effectively?’” she says. “Superintendents and school board members are increasingly coming to us and saying, ‘We want to do this; can you help us?’”

In 2019, when California became the first state in the country to require later school start times, it got international coverage, says Snider, who’s been tracking news about school start times since founding Start School Later in 2011.

Although that change for California’s public middle and high schools doesn’t go into effect until 2022, the pandemic-driven shift to remote school prompted some schools to make the shift sooner than initially planned. In the Los Angeles Unified School District, the country’s second-largest, the 2020-2021 school year began with a new, later 9 am start time.

“Things that we thought were fixed in stone, like school hours… are actually not,” says Snider. “When you have to change things, you can.”

For teen sleep, that’s been beneficial: A study published in Sleep Medicine in December 2020 found that students whose school day started later in the morning due to COVID-19 slept longer and had higher-quality sleep than they’d had with their previous schedules.

Experts like Ziporyn Snider hope that the lesson — later start times promote teen wellness — is one that sticks even after traditional schooling resumes.

“Sleep in general has entered the public conversation a lot more than it was 10 years ago as a pillar of public health,” she notes.

When school starts later, “it’s crazy how different it feels,” adds Marciano. “You just start the day off so much happier.”

If your child’s school starts earlier than what’s recommended, consider coordinating with other like-minded parents and/or starting a local chapter of Start School Later.

Get more information about the author’s forthcoming book for parents about teen sleep.

Information about incorporating sleep into health, biology and other class curriculum is available for free at Let’s Sleep section for teachers, and sample presentations illustrating some of the benefits of later school start times are available to members of Start School Later.

Other districts can be role models when addressing implementation concerns, such as transportation and sports. Periodic workshops are hosted by Start School Later and affiliated groups; for more information, visit Let’s Sleep section for school administrators.

This article is part of our Transforming High School series, a collection of stories, videos, and podcasts exploring the practices that prepare students for success in college and beyond.