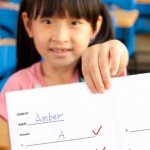 One mother confronts her daughter’s preoccupation with grades and researches the science behind student evaluation.

“How do they do it then?” she stammered. “Do you really think they don’t care about grades?

My daughter and I were leaving an information session for a soon-to-be-launched high school of a K-8 learning mecca in the hills south of San Francisco. Obsessive edu-wonk that I am, I hung on their every buzzword: Social-emotional competencies! Project-based learning! Deep multidisciplinary exploration ending in a trip to Machu Picchu!

As we trailed out of the sunny library under a canopy of pine trees to the parking lot, she fell strangely silent. I thought I knew what she was thinking: she’d already experienced the heartbreak of not getting into middle schools she had her heart set on — whether by losing the public school lottery or being denied by private school admissions. Now this was our first toe dip into the high school search. I expected her to be daunted. Instead, she’d zeroed in on a single moment in the 90-minute discussion that revealed one of the schools’ deepest differences.

The director of admissions had talked about her high school where kids grilled teachers on what would be on the test, learned that material and nothing else, procured the A, then quickly forgot everything in cramming for the next test. “We don’t do that here,” she explained.

This was music to my daughter’s ears.

According to the head of the high school, their K-8 school doesn’t have grades. Instead, they write narrative responses to kids’ work. After much debate, it was decided that the new high school would have grades, but only to prevent colleges from basing admissions decisions solely on SAT scores. The high school would not be a place, he implied, where children obsessively recalculated their GPAs based on every extra credit problem.

It’s easy to think about grading as a timeless fixture of a formal education, but the history of grades is relatively short. Although the exact origins are somewhat disputed, the practice of grading students started in 1792 when William Farish, a pay-for-hire tutor at the University of Cambridge, borrowed a new industrial practice of grading work products such as shoes. The new efficiency of a single numerical grade for student work released him from the laborious work of communicating with each student, allowing him to expand his clientele.

The first letter grades appeared at Mount Holyoke College in 1897. Gradually, the practice trickled down from college to all levels of schooling. Grading scales and rituals vary around the world, but the premise of quantifying a students’ work with a single letter or number remains consistent.

Not every school or educator has embraced the practice. Some schools (like the Waldorf schools, founded by Rudolf Steiner) and teachers reject — or at least delay — grading children on the grounds that it interferes with the intrinsic rewards of learning by focusing on the extrinsic. Alfie Kohn, a progressive educational theorist, has probably been the most vocal critic of grades, detailing all the ways a fixation on grades undermines students’ willingness to learn, take on bigger challenges, and think more deeply. Citing research that a “grading orientation” is associated with more cheating and a fear of failure even among successful students, in his article, “The Case Against Grades,” Kohn doesn’t mince words: “grading for learning is, to paraphrase a 1960s-era slogan, rather like bombing for peace.”

Grade junkies getting their fix

Since my daughter had turned a corner on her school work, I’d begun to observe some of the problems Kohn chronicles. Once irritated just by sitting in class, my daughter now studies with a zealot’s dedication. Partly this is in response to great teachers and interesting challenges. But grading also created its own addictive feedback loop. As she began to get straight A’s in middle school, she quickly became haunted by anxiety about not getting them. Lack of clarity from a teacher about what might be on a test, for instance, could send her into mild apoplexy.

Recently, she wanted to skip her class field trip to a baseball game to study for a Spanish test. With a shake of their heads and a comment that they want students to be “well-rounded,” her teachers convinced her to go, but not without my 13-year-old tearfully wondering if her decision might lead to a bad grade on a test that might wreck her transcripts, which might affect where she goes to high school, which we all know influences college and the very horizons of your life’s potential…

A curious absence of grading grades

What does the research really say about grading? Alfie Kohn’s condemnation aside, the evidence for or against grading is rather paltry, says David Figlio, director of the Institute for Policy Research at Northwestern University. “I would love to see studies on grading or not grading, but I’m not seeing those,” he says. The problem, Figlio says, is that it’s difficult to tease out the effects of certain kinds of grading practices (or non-grading practices) in classrooms filled with variables. “Finland doesn’t grade, but Finland’s students are at the top of the world, so we know that there are great systems without grading. On the other hand, Finland treats teachers like doctors. Everyone looks at Finland and chooses their favorite story about education.”

Instead, while psychologists — most notably Stanford University’s Carol Dweck — have made great strides uncovering what motivates children to take on difficult challenges and focus on learning (telling them they are smart and pumping up their self-esteem with empty praise won’t work), educational research about grading has been mostly focused on the how, not the whether. Many researchers have compared the relative merits of standards-based versus traditional letter grades versus narrative responses. (One study found that narrative responses are more motivating than single letters or numbers.) Figlio conducted a study on grading standards, comparing how fourth graders perform in classrooms with teachers known as easy and hard graders. Results showed that students work harder for teachers with higher standards (or harder grades) — especially lower-performing students. This study may help explain the higher performance of some Asian countries like Korea or China, where there is a relenting focus on rigor and an unabashedly competitive culture.

Ironically, findings that suggest hard graders are more motivating than easy graders doesn’t necessarily contradict the larger indictment about grades interfering with learning as a whole. Both jibe with Dweck’s theory of growth mindset, which suggests that self-consciousness about performance (how good or bad you are) is a cognitive distraction to learning and that empty praise (in the form of inflated grades) also drains students of focus and motivation. Perhaps the worst kind of grading is the one many American schools embrace — an intense focus on grades coupled with widely accepted grade inflation.

Grades mean everything. No they don’t.

Not all kids are drawn into this vortex, and researchers would do well to study them to find out what allows some students to filter out the ABCDF chatter. But many are. Especially, sadly enough, students who are considered the most successful. One mother whose 15-year-old son attends a high-performing public school conceived of an Onion-styled headline to describe his school’s culture: Breaking news: students in hall overheard talking about something other than their GPAs! Even the kids who seem disinclined to grade obsession struggle with the ironic mixed messages (Grades determine your future! Don’t be a slave to your grades! Don’t let your GPA fall! Grades don’t tell the whole story!) surrounding grades.

One straight-A high school student I know received a lecture from an English teacher about not taking grades so seriously. She even had the boy to write a paragraph about how meaningless they are. Later that week, she gave him an F on an important project that was incomplete. He insisted (and offered evidence) that the teacher had been unclear about the deadline and she eventually gave him credit. But when he lost it in front of her, she used his meltdown as a teaching moment to remind him that grades don’t really matter.

Is it any wonder that so many of our kids are so anxious? As adults, we know that real life is elastic, difficult to measure, and success rarely comes from coloring inside the dotted lines of someone else’s coloring book. But in this era of heightened college competition, disappearing middle-class jobs, and a passion for all things metric, it’s not hard to understand why kids might be baffled about how they are both supposed to a) focus on deeper learning and find their inner passion, while b) maintaining that GPA adults will use to determine their future.

Yet as a parent, it’s a delicate balance. Should I go all tiger mother to help my daughter keep her aspirations high? Or should I ease up and even discourage my already-stressed child from compulsively embracing these inherently reductive assessments of her learning? How to thread that needle? I don’t know. Last week, after the crying ordeal over her Spanish final, my daughter implored her father and me to “not make a big deal” about an upcoming math final. “Say it doesn’t matter!” But yesterday she mentioned, with a sly grin, that she got a perfect score.

“That’s great,” I said enthusiastically. Then I immediately tempered myself: “Not that grades matter.”

“Mom don’t say that! This time they do.”