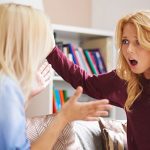 Versión en español
Advertisement
Parenting » Dilemmas » How to react when your child says, “I hate you!”

How to react when your child says, “I hate you!”

It's rarely what a child of any age really means. But it stings. Here, four parenting experts offer advice for responding to a hurtful outburst from your adolescent.