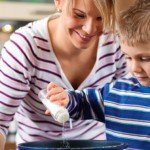 Are you baffled about how to manage your child's difficult behavior? Remember that each step he takes toward better behavior is a move in the right direction.

“Doo-doo diaper-head!” That was the name Michael, age 5, called me in my first interview with his mother and him. Frustrated, and not wanting to be in a psychologist’s office, Michael was angry and showed it the only way he knew how. Embarrassed, his mother calmly scolded him, “Don’t say that, Michael. That’s not nice.” Not knowing what else to do with her misbehaving son, she soon directed her attention back to me.

As a psychologist, I want to see the behavior in my office that parents often have trouble with at home. While Michael’s outburst was helpful for me to see, I knew that his mother was disturbed by it. During the third session, Michael again became upset, but instead of resorting to calling me names, he took on a sour face, stared for a moment at me, turned abruptly away from me, and faced the window. “Michael, that’s rude! Now turn around and stop that pouting.” Again his mother was upset by his inappropriate behavior.

“I know you get frustrated with him, Mom,” I responded, “but he’s showing better behavior and doing a child’s version of a self-imposed timeout. Actually, it’s better than calling me names.”

“I guess so,” his mother replied hesitantly, “but he can be so rude. How do I stop him from being so rude and mean?”

While Michael’s mother is at a loss about how to handle her difficult child, she is also somewhat hesitant to reinforce a small but positive change in his behavior. “But it’s still inappropriate,” his mother commented when I noted the change from the first to the third session.

How children and adolescents learn

Children and adolescents with learning disabilities (LD) and Attention-Deficit/Hyperactivity Disorder (ADHD) often have social and behavior problems along with their learning and attention problems. Rarely do their difficulties occur in isolation of other manifestations. Many parents, teachers, and therapists try rewards or punishments to change much of their defiance or inappropriate behavior. All too often we excuse these children because we believe the myth that they “can’t” behave and that it is not within their capabilities. As a result, many grow up thinking the world will tolerate their unruly or just plain “rude” behavior.

As children grow, most children “get it” or seem to incorporate the subtle nuances of our social dance. They understand that when another child rolls his eyes, it is usually a sign that he has had enough of your behavior, or that a sigh means move on to another topic. While these subtleties are often naturally intuited, when a child doesn’t easily pick up on them, we often become frustrated and try to teach these skills with our endless lecturing, scolding, and comparison to a sibling or another child. All of our attempts usually fall on deaf ears. Our children’s “deaf ears” are not out of defiance, although it often looks like that, but due to a disability. These disabilities are similar to a math or a reading disability and should be handled accordingly. The problem with our approach is two-fold: first, we don’t reinforce small changes, and second, we tend not to teach skills but use punishment instead. This article will deal with the first problem.

When students fail a subject, say math, we don’t expect them to immediately make an A. Instead, we look for slight improvements like a D- with our tutoring. This signifies they are moving in the right direction. From a D we look for them to improve their grade up to a C and so forth. If I asked any teachers of a student who was failing what the first sign of change would be, they would all indicate a D or thereabouts. Yet when it comes to behavior, we expect children and adolescents who misbehave to immediately right their wrongs and exhibit perfect behavior, hence, go from an F to an A.

One cause of misbehavior

One such patient, Ryan, an oppositional 16-year-old, was continually late on weekends, violating his curfew. His mother would ground him but first engage in a lengthy lecture that usually ended up in a screaming match between the two. Later, to cut down on her worry, she purchased a cell phone for him and instructed him to call her if he was going to be late, hoping the cell phone remedied the situation. The following weekend Ryan took the phone as instructed but didn’t turn it on. Again, on returning home late, he was grounded along with a lecture on how insensitive and selfish he was. Several weekends later, he was permitted to go out again. Ryan took his cell phone, turned it on, and when his mother called, had his girlfriend answer it. Ready to pull her hair out, his mother later consulted me on why he does this and why he just can’t follow the rules. “Doesn’t he see how much easier life would be if he just followed the rules?”

One reason Ryan wasn’t following the rules is that he felt whatever he did wouldn’t be good enough for his mother. His exact words were, “What’s the use?” He was not only dejected but demoralized. He demonstrated his demoralization in even more defiant behavior. “It doesn’t matter what I do,” Ryan retorted. “Mom will find something wrong with everything I do.”

I’ve heard this cry of demoralization over and over again in my practice from kids 3 years old to late adolescence. In their attempt to get better and improve their behavior, they often move up a step or two on “the ladder of better behavior” only to have their improvement not acknowledged but criticized. Children with ADHD and LD especially need to know what behaviors we want to see instead, not just what not to do, as we so often let them know through our punishment. Being specific about expected behaviors and movement in the right direction is vitally important and essential to kids with LD. If we are not clear with our expectations and simple encouragement, they relapse to their original poor behavior.

An easy and extremely effective way to change a child’s behavior is to note the small improvements or steps that he takes. The psychological term for this is “successive approximations.” Successive approximation, or reinforcing small changes, as we refer to it in my practice, involves picking a single misbehavior, determining the smallest sign of change, and then noting when the child has displayed that behavior. For many inappropriate behaviors, or misbehaviors, this is an effective tool to instigate change.

For instance, many parents hate the insolent and disrespectful tone with which their adolescent often talks to them. “How do I make him stop talking to me like that?” is often the response of a parent. Instead of just telling your sullen adolescent not to talk to you that way, find a time he is talking to you with a respectful and appropriate tone, and then say, “Jeff, see how you’re talking to me now? That’s how I want you to talk to me when you are angry or upset with me. I can hear you much better. Please do more of that.” Even if your teenager is talking to you about new computer games or a sports event, he is less defensive and better able to register what he is doing and how he is communicating with you so he can replicate it.

Now just commenting on better behavior once will not ensure that all future problems are solved. Remember, kids don’t go from F’s to A’s in one quick motion but rather with persistence, encouragement, and over time. Hence, you will have to find several times over the course of many days that your adolescent is talking in a respectful tone. Also, the next time he is upset, note after the argument any slight changes you may have perceived; i.e., “Brett, I noticed earlier today when you were upset with me, you didn’t use any cuss words. Keep going on that track. You are in the right direction.” Your adolescent not only hears what you want him to do more of, but he doesn’t get discouraged.

How to reinforce a small change

Remember, big behavior changes are a conglomeration of smaller changes and don’t occur without those building blocks. In the earlier example of Ryan violating his curfew, what could his mother have done differently? First, she should continue to ground him for violating curfew. Reinforcing small changes does not mean allowing misbehavior to slide. Second, she could have noted the small changes that he exhibited, such as, taking the cell phone with him, having his girlfriend answer it, or coming in 1.5 hours late instead of his usual 2.5 hours late. Acknowledging any or all of these steps towards better behavior would have amounted in continued, but slow, improvement with Ryan instead of his abject resentment and demoralization.

While improved behavior doesn’t occur instantly, we often inadvertently discourage it by not noting small changes. By setting the bar lower, and raising it consistently over time, we are much more likely to get better behavior from our obstinate youngsters.

Finally, as far as Michael calling me a “diaper-head,” I’ve been called worse.